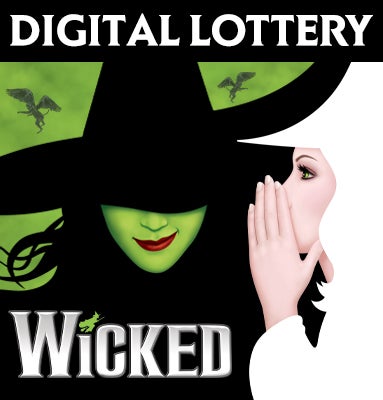 Steven Tanger Center for the Performing Arts announced that a digital ticket lottery for a limited number of seats will be held for WICKED, which is making its Triad premiere at to the all-new Tanger Center from October 6 - 24, 2021, kicking off the inaugural Broadway season of Broadway at Tanger Center.

The digital lottery will open at 9 a.m. the day prior to each performance, closing at 4 p.m. the same day. Seat locations vary per performance.

HOW TO ENTER THE DIGITAL LOTTERY

WICKED will play at the all-new Steven Tanger Center for the Performing Arts October 6-24, 2021, with best availability remaining for weeks 2 and 3 of the engagement.

Tanger Center is keeping up-to-date with local and state guidelines and is taking steps and implementing new policies and procedures in order to make the return to live events as safe and enjoyable as possible. Health and safety protocols based on current guidance from public officials and theatrical unions may be in place at the time of any performance and could require a face covering. Due to the mandate issued by the Guilford County Board of Health on August 13 requiring masks to be worn indoors, masks will be required at all times when in the venue. For more information, visit TangerCenter.com/PatronHealth.

The Broadway sensation WICKED looks at what happened in the Land of Oz…but from a different angle.  Long before Dorothy arrives, there is another young woman, born with emerald-green skin, who is smart, fiery, misunderstood, and possessing an extraordinary talent. When she meets a bubbly blonde who is exceptionally popular, their initial rivalry turns into the unlikeliest of friendships…until the world decides to call one “good,” and the other one “wicked.”

With a thrilling score that includes the hits “Defying Gravity,” “Popular” and “For Good,” WICKED has been hailed by The New York Times as “the defining musical of the decade,” and by Time Magazine as “a magical Broadway musical with brains, heart, and courage.” NBC Nightly News calls the hit musical “the most successful Broadway show ever.”

Now the 5th longest running show in Broadway history, WICKED is the winner of over 100 international awards including the Grammy Award and three Tony Awards. Since opening in 2003, WICKED has been performed in over 100 cities in 16 countries around the world (U.S., Canada, United Kingdom, Ireland, Japan, Germany, Holland, Australia, New Zealand, Singapore, South Korea, The Philippines, Mexico, Brazil, Switzerland and China) and has thus far been translated into six languages: Japanese, German, Dutch, Spanish, Korean and Portuguese. WICKED has been seen by over 60 million people worldwide and has amassed over $5 billion in global sales.

Based on the novel by Gregory Maguire, WICKED has music and lyrics by Stephen Schwartz, and a book by Winnie Holzman.  The production is directed by Tony Award winner Joe Mantello with musical staging by Tony Award winner Wayne Cilento.  WICKED is produced by Marc Platt, Universal Stage Productions, The Araca Group, Jon B. Platt and David Stone.

Limit 1 entry per person, per performance. Multiple entries will not be accepted. Patrons must be 18 years old and have a valid, non-expired photo ID that matches the names used to enter. Tickets are non-transferable. All lottery prices include a $4.00 facility fee. Ticket limits and prices displayed are at the sole discretion of the show and are subject to change without notice. Lottery prices are not valid on prior purchases. Lottery ticket offer cannot be combined with any other offers or promotions. All sales final - no refunds or exchanges.  Lottery may be revoked or modified at any time without notice. No purchase necessary to enter or win.  A purchase will not improve chances of winning.