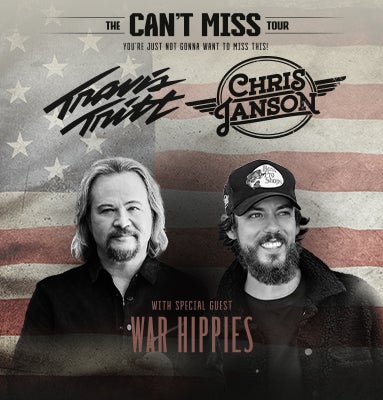 Two of Country Music’s most dynamic performers and multi-platinum selling and award-winning artists, Travis Tritt and Chris Janson have added five more dates to their co-headline tour, The Can’t Miss Tour, coming to Tanger Center on November 3. Joining Tritt and Janson are War Hippies, who will appear as special guests along the tour. Tickets go on sale on Friday, July 15 at 10 a.m. at TangerCenter.com.

See below for the full list of The Can’t Miss Tour tour dates:

For tickets and more information, please visit www.TravisTritt.com or www.ChrisJanson.com.

About Travis Tritt: Travis Tritt’s albums, seven of which are certified platinum or higher, have led him to amass more than 30 million in career album sales, two GRAMMY® Awards, four CMA Awards, including the CMA Horizon Award (now known as the New Artist Award); a Billboard Music Award for Top New Artist, an invitation to become a member of the world-famous Grand Ole Opry and a devoted fan base that has filled venues coast-to-coast. He is also dubbed one of “The Class of ‘89,” which includes Country music superstars Garth Brooks, Clint Black, and Alan Jackson, who dominated the charts in the ‘90s. Among his eleven studio albums and numerous charted singles are five number ones and 20 Top 10 hits, including “Help Me Hold On,” “Anymore,” “Can I Trust You with My Heart,” “Foolish Pride,” “Best of Intentions,” “I’m Gonna Be Somebody,” “Modern Day Bonnie and Clyde,” “Here’s A Quarter,” “It’s A Great Day To Be Alive,” and more. Tritt continues to sell-out shows to his devoted fan base, which has filled venues for years. This tour is no different, bringing Tritt’s authenticity and country music coast-to-coast.  Tritt is booked by Reliant Talent Agency, relianttalent.com.  For more information, please visit https://travistritt.com/ and follow Travis Tritt on Twitter, Facebook, and Instagram.

About Chris Janson: “Live legacy in the making” (Rolling Stone) Chris Janson is a platinum-selling recording artist, celebrated entertainer, multi-instrumentalist and award-winning singer/songwriter. The ACM Award-winner has collected prestigious accolades that place him amongst country music greats. Both his inspiring hit “Drunk Girl” and his chart-topping, 3x Platinum smash “Buy Me A Boat” were named among NSAI’s “Ten Songs I Wish I’d Written” lists – making Janson one in a handful of the industry’s most elite artists to earn the title multiple times. “Buy Me A Boat” was also recognized as the iHeartRadio Music Awards Country Song of the Year. “Good Vibes,” the flagship single from his 2019 album Real Friends, and follow-up “Done” each topped the country charts, bringing his total of No. 1 songs to four – and now the hit-maker is entering a new chapter with his fourth studio album All In, due April 29. The fully loaded 16-track project finds Janson demonstrating the range of his artistry, featuring all-star collaborations with Eric Church and Travis Tritt. The album’s “blazing, high-octane” (MusicRow) opening track “Keys to the Country” will impact country radio in June. In addition to his own successes, the talented songwriter has lent his pen to industry peers including Tim McGraw (“Truck Yeah,” “How I’ll Always Be”), LOCASH (“I Love This Life”) and the legendary Hank Williams Jr. (“God Fearin’ Man,” “Those Days Are Gone”). With more than seven billion airplay impressions to date and nearly two billion career streams, Janson is, more than ever, All In.

About War Hippies: War Hippies is a brand-new country duo and lifestyle brand from USMC and US Army combat veterans, Scooter Brown and Donnie Reis. Forming in 2022, each has enjoyed an extremely successful career of their own. Reis is a world-renowned violinist who has spent years on the road with various artists playing violin/fiddle, piano/keys, guitars and contributing vocals. His work over the years has included a wide range of artists, groups, television and film projects spanning the genres of Country, Rock, Pop, Gospel and Singer-Songwriter. Donnie’s achievements include 26 Billboard Top 10's and 4 songs on the Billboard 200 chart. Scooter Brown formed the Scooter Brown Band over ten years ago and began playing mainly in and around Houston, Texas. They have since toured North America and opened for some of their biggest influences including the Charlie Daniels Band, Travis Tritt, Dwight Yoakam, Lee Roy Parnell and the Marshall Tucker Band, just to name a few. War Hippies has become known for their stellar live performance including tight harmonies and a wide-range of song selections. Expect great things in 2022.