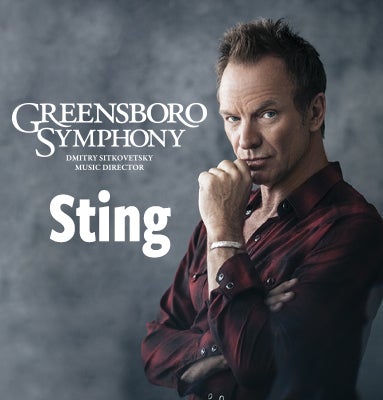 Composer, singer, author, actor, and activist, Sting is one of the world's most renowned and distinctive artists. Throughout his illustrious career, he has received 17 Grammy Awards, a Golden Globe, an Emmy, four Oscar nominations, a TONY nomination and has sold 100 million albums from his combined work with The Police and as a solo artist. On Saturday, December 19, 2020 at 8:00 pm, The Greensboro Symphony Orchestra (GSO) is proud to welcome Sting back to Greensboro as he performs alongside GSO at the Steven Tanger Center for the Performing Arts!

His latest album, My Songs, includes contemporary interpretations of his most celebrated hits and was accompanied by a critically acclaimed world tour. Later this year, he will headline a Las Vegas residency, also entitled My Songs, set to open at The Colosseum at Caesars Palace on August 15. The show will present a compendium of Sting’s music with dynamic, visual references to some of his most iconic videos and inspirations.

The Symphonicity Tour (2010) in support of his album Symphonicities, featured his greatest hits reimagined for symphonic arrangement. Accompanied by the Royal Philharmonic Orchestra, the Symphonicity Tour, lauded as a “fantastic musical experience,” visited 114 cities in 38 countries around the world over the course of 14 months.

Sting, a member of both the Rock and Roll Hall of Fame and the Songwriters Hall of Fame, last performed in Greensboro in May 2001 for an incredible show at the Greensboro Coliseum. Don’t miss this exceptional artist’s return to the Gate City now alongside your Greensboro Symphony Orchestra!

This concert is currently available only to subscribers of the 2020-21 Masterworks, Chamber and POPS Series. Tickets go on sale to the general public on August 1. For more information, visit greensborosymphony.org / GSO Box Office: 336-335-5456 x224