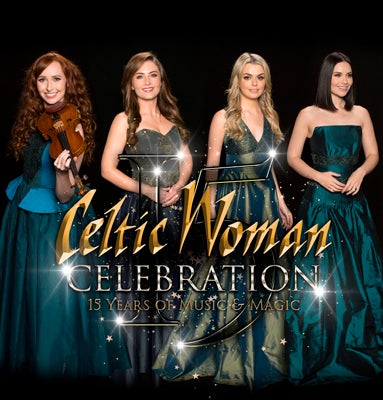 Chloë Agnew, an original member of CELTIC WOMAN, the most successful all-female group in Irish history, has rejoined the group as a special guest artist for CELEBRATION – THE 15th ANNIVERSARY TOUR. The tour will visit more than 80 North American cities in including Greensboro at the Steven Tanger Center for the Performing Arts on June 4. Tickets are now on sale at Ticketmaster.com and the Greensboro Coliseum Box Office.

Chloë Agnew is an original member of CELTIC WOMAN, joined the group at the age of 15, performing around the world for a decade, and is featured on 14 albums and DVDs. Chloë returns to the show to celebrate a very special milestone, showcasing the group’s greatest hits from 15 years of inspired live performances, television specials and recordings.

“When Celtic Woman’s journey first started - I was only 15 years old. This year marks 15 years of Celtic Woman and it feels like the right time to come home to where it all began,” said Agnew.  “I am thrilled to say that I will be returning to the show as their special guest on the upcoming 15th Anniversary Celebration Tour this Spring. I have loved watching the girls carry on the legacy of Celtic Woman in recent years and I’m so looking forward to bringing back a little piece of the original show into the new one. It’s going to be an exciting few months ahead getting to return to lots of my favorite cities and venues throughout North America and I can’t wait to see all of you on the road again!”

The Grammy-nominated, multi-platinum international music group CELTIC WOMAN has over one billion online streams, 12 consecutive Billboard number ones, and 10 million albums sold. The group has performed for three Presidents and appeared twice at the White House in addition to regular visits to the greatest performing arts centers in North America and around the globe.

Audiences can expect songs such as the siren call of Orinoco Flow, the playful Teir Abhaile Riu, the uplifting anthem You Raise Me Up, the age-old favorite Danny Boy, and the moving, bagpiper-led Amazing Grace among many showstopping favorites.