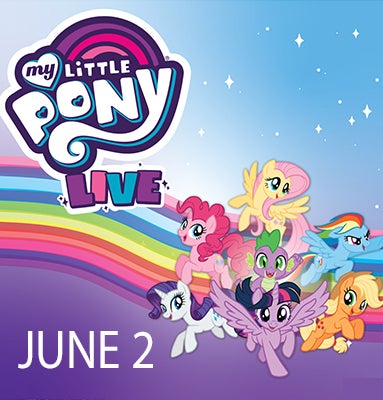 In its first-ever U.S. tour, the beloved MY LITTLE PONY: Friendship is Magic characters will take the stage in their all-new musical debut, MY LITTLE PONY LIVE.  Inspired by the brand’s signature themes of friendship and magic, the original production features popular pony friends affectionately called, “the Mane Six” – Twilight Sparkle, Pinkie Pie, Rarity, Fluttershy, Applejack and Rainbow Dash.  Rounding out the lineup is Spike the Dragon, a fan favorite from the hugely successful MY LITTLE PONY: Friendship is Magic television series, which is currently airing its ninth season.

The fantastical, sensation-filled musical tells an exciting new tale.  As the ponies prepare for the blossoming of Ponyville’s Rainbow Tree, promising another hundred years of friendship, trouble arises in Equestria.  The Mane Six must set out to save the ailing Rainbow Tree with strength, determination, creativity and — of course — the magic of friendship!  Come one pony, come all, on this unforgettable journey to Equestria!

MY LITTLE PONY LIVE comes to the Steven Tanger Center for the Performing Arts on Tuesday, June 2, 2020 at 7 p.m. Tickets start at $25 and go on sale Friday, August 9 at 10 a.m. Tickets at TangerCenter.com, Ticketmaster.com and the Greensboro Coliseum Box Office.

Hasbro (NASDAQ: HAS) is a global play and entertainment company committed to Creating the World's Best Play Experiences. From toys and games to television, movies, digital gaming and consumer products, Hasbro offers a variety of ways for audiences to experience its iconic brands, including NERF, MY LITTLE PONY, TRANSFORMERS, PLAY-DOH, MONOPOLY, BABY ALIVE, MAGIC: THE GATHERING, and POWER RANGERS, as well as premier partner brands. Through its entertainment labels, Allspark Pictures and Allspark Animation, the Company is building its brands globally through great storytelling and content on all screens. Hasbro is committed to making the world a better place for children and their families through corporate social responsibility and philanthropy. Hasbro ranked No. 13 on the 2019 100 Best Corporate Citizens list by CR Magazine, and has been named one of the World’s Most Ethical Companies® by Ethisphere Institute for the past eight years. Learn more at www.hasbro.com, and follow us on Twitter (@Hasbro) and Instagram (@Hasbro).

Mills Entertainment, a live entertainment content studio, and division of Creative Artists Agency (CAA), collaborates with top talent and property holders to create unforgettable live experiences.  With full global distribution and partnerships worldwide, our specialty is taking shows from concept to stage, serving as the complete solution in realizing the vision.  Current projects include The Elf on the Shelf: A Christmas Musical, American Girl Live and Daniel Tiger’s Neighborhood Live!  www.millsentertainment.com