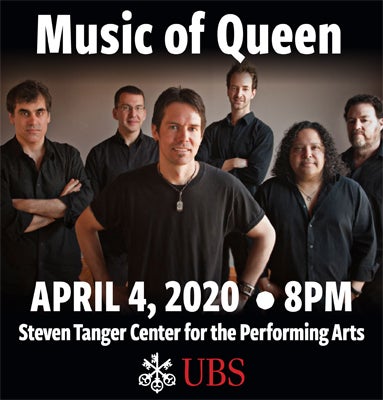 Greensboro Symphony to present Music of Queen! at Tanger Center

Welcoming one of the most accomplished classic rock cover groups around, the Greensboro Symphony Orchestra (GSO) is proud to share the stage with Windborne as they present the Music of Queen! Come and experience a high energy tribute to one of the most influential rock bands of all time, joined by the full symphonic forces of the GSO. The spectacle begins at the Tanger Center for the Performing Arts on April 4th, 2020 at 8:00pm!

Tickets will go on sale Tuesday, Dec. 3 at Ticketmaster and the Greensboro Coliseum Box Office.

Bridging the gulf between rock n’ roll and classical music, Berklee-trained conductor/arranger Brent Havens takes the podium to present Windborne's newest show—a program he scored to extend the listening experience of Queen's exceptional tunes. Performed by an orchestra and amplified with a full rock band, vocals, and rock concert lighting! Havens and his ensemble capture Queen's distinct sound while presenting some familiar and lots of new musical colors.

“As always we wanted to keep the foundation of the music as close to the originals as we could and then add additional colors to enhance what Queen had done,” says Havens.  “The wonderful thing with an orchestra is that you have an entire palette of sounds to call upon. The band is reproducing what Queen did live, as closely as possible, and then having an orchestra behind the band gives the music richness, a whole new feel, a whole different sense of color but still preserving the wonderful music that they originally produced.”

You won’t want to miss out on this spectacle for old fans and new as the GSO and Windborne present Music of Queen!