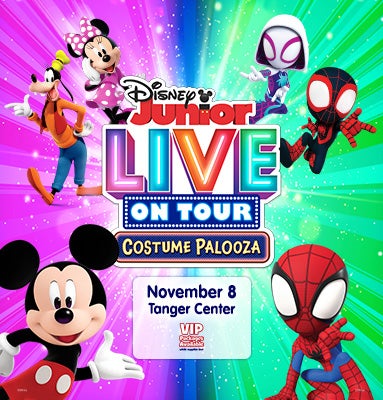 Dress up and join the party with “Disney Junior Live On Tour: Costume Palooza” coming to Tanger Center in Greensboro on November 8. The all-new show features the first appearance of characters from “Marvel’s Spidey and his Amazing Friends” in addition to Mickey, Minnie, Goofy, Doc McStuffins, the Puppy Dog Pals, and Alice from Disney Junior’s newest hit series “Alice’s Wonderland Bakery,” live on stage. The immersive, interactive concert experience includes singing, dancing, acrobatics and 3D special effects. It will feature favorite songs from hit Disney Junior series, as well as new original music. In “Disney Junior Live On Tour: Costume Palooza,” Mickey, Minnie, and their pals are getting ready to throw a huge costume party but mysterious weather keeps interrupting the fun. Can Team Spidey help save the Costume Palooza?

Tickets on sale Friday May 20 at 10am at Ticketmaster.com.

The show is brought to you by the creators of the 2x Pollstar nominated “Disney Junior Dance Party On Tour” which sold over 350,000 tickets. The live show is written and directed by Amy Tinkham and produced by Jonathan Shank of Terrapin Station Entertainment. Parents can go to DisneyJuniorTour.com to get more information, view tour dates and purchase tickets.

“We are going to blow the minds of Disney Junior fans with all the on-stage fun and new songs we have in store for them,” says Jonathan Shank, producer and CEO of Terrapin Station Entertainment. “We are so excited to be working with the Disney Junior team again on this premier preschool production bringing back all the beloved Disney characters, and now, for the first time, ‘Marvel’s Spidey and his Amazing Friends’,” says Shank.

“It is great to be able to bring the Disney Junior characters back on the road again, bigger and better, with incredible acrobatics, songs, and dances. We know that families won’t want to miss the chance to see ‘Marvel’s Spidey and his Amazing Friends’
perform, as well as Mickey, Minnie, and their favorite Disney Junior pals.” says Jennifer Rogers Doyle, senior vice president, Networks Franchise Management, Integrated Planning, Licensing, Disney Media and Entertainment Distribution.