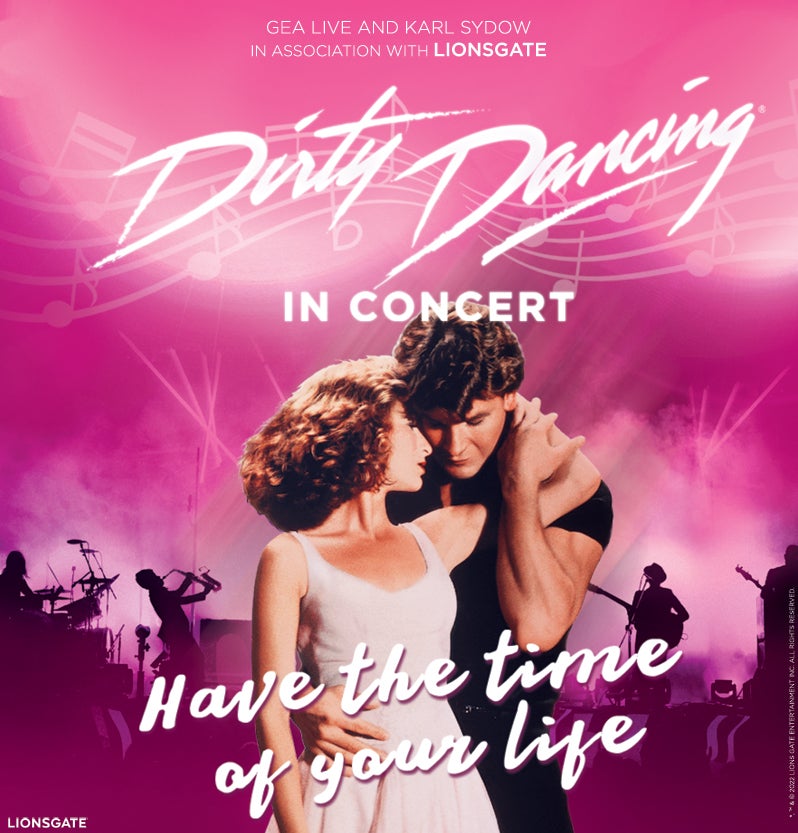 Relive the timeless love story of Baby and Johnny as global content leader Lionsgate (NYSE: LGF.A, LGF.B), GEA Live, Karl Sydow and Tanger Center announce Dirty Dancing in Concert, celebrating the film’s 35th anniversary on a full-size cinema screen with a band and singers live on stage. With a soundtrack that defined a generation, Dirty Dancing in Concert promises to bring a new thrilling experience to the 80s classic!

Audiences attending Dirty Dancing in Concert will experience the hit film in a unique and unforgettable way. A complete screening of the digitally remastered film will play as a band and singers perform the songs live, in sync with the film. Stay for the encore party and continue to sing and dance along with the band to your favorite Dirty Dancing songs.

Dirty Dancing in Concert will tour in 35 cities in North America in 2022. Opening in celebration of the 35th anniversary of the film, fans will have a new way to immerse themselves in the world of Dirty Dancing while celebrating the classic they know and love. For a list of cities and ticketing information, please visit www.dirtydancinginconcert.com.

Dirty Dancing, written by Eleanor Bergstein, directed by Emile Ardolino, and starring Patrick Swayze and Jennifer Grey in their most iconic movie roles, was a worldwide box-office sensation when it was released in 1987. Its soundtrack generated two multi-platinum albums and multiple singles, including the Academy Award®-winning best original song “(I’ve Had) The Time of My Life”. Grossing more than $213 million worldwide, Dirty Dancing captured the hearts of audiences everywhere.

Set in the summer of 1963, Baby Houseman (Jennifer Grey) and her family vacation to the beautiful Catskills resort, Kellerman’s. Intrigued by the staff’s dance instructor, Johnny Castle (Patrick Swayze), and the vastly different lifestyle of others, Baby finds herself learning to dance while having the time of her life and falling in love. It is a summer she’ll never forget.

Dirty Dancing in Concert’s tour joins a series of live-to-film concerts touring internationally based on Lionsgate properties, including the highly successful La La Land in Concert, with more than 125 performances in 25 countries to date.

Tickets for Dirty Dancing in Concert go on sale on Friday, June 24, 2022 at TangerCenter.com and Ticketmaster.com.