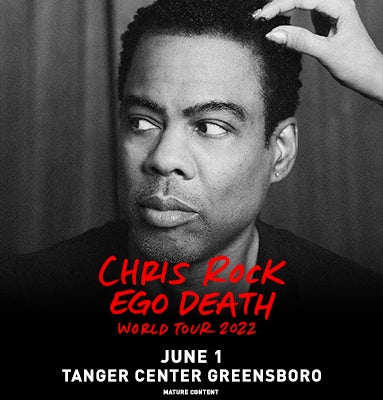 Chris Rock is bringing his Ego Death World Tour to the Tanger Center stage on June 1. Tickets are on sale Friday, May 13 at 10 a.m. at TangerCenter.com and Ticketmaster.com.

Chris Rock is one of the world’s most important comedic voices, as well as an award-winning actor, director, producer, and writer. Rock recently wrapped production on the upcoming Higher Ground produced biopic, Rustin.

In 2021 Rock starred as Loy Cannon in season 4 of FX’s Emmy-winning drama series Fargo. He also teamed up with Lionsgate and Twisted Pictures in the reimagining of the newest Saw franchise movie, Spiral, in which he produced and starred in. His most recent standup special, Total Blackout: The Tamborine Extended Cut, is now streaming on Netflix.

Rock’s big break in television started as a cast member on Saturday Night Live. He executive produced, wrote and narrated the award-winning series Everybody Hates Chris.  In 2011 Rock made his Broadway debut starring in Stephen Adly Guirgis’s The Motherf**ker With The Hat.  In 2016 Rock returned to host the 88th Annual Academy Awards.