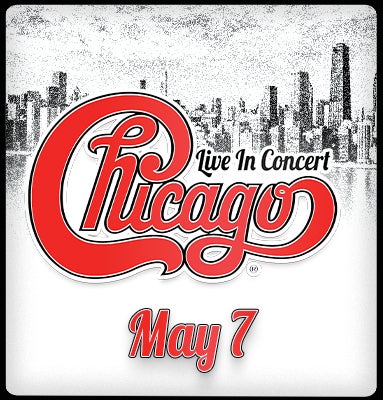 Chicago coming to Tanger Center on May 7

Rock and Roll Hall of Fame and Grammy winners, Chicago, will be coming to the all-new Steven Tanger Center for the Performing Arts on Thursday, May 7.

Tickets are on sale Friday, February 21 at noon via:

Hailed as one of the “most important bands in music since the dawn of rock and roll,” the legendary rock and roll band with horns, Chicago comes in at #10 on Billboard Magazine’s Top 125 Artists of All Time, the highest charting American band. They are also the first American rock band to chart Top 40 albums in six consecutive decades.

As inductees of the Rock and Roll Hall of Fame, they are also recipients of Grammy Awards, American Music Awards and have a star on the Hollywood Walk of Fame. Thanks to an endless stream of mega-hits that include “You’re the Inspiration,”   “If You leave Me Now,” “25 or 6 to 4,” “Saturday in the Park,” “Hard to Say I’m Sorry,” “Colour My World” and many more, they have sold over 100 million records. In 2017, Robert Lamm and James Pankow were inducted into the Songwriters Hall of Fame.

Chicago have toured every year since the beginning - they’ve never missed a year.  The original three band members are Robert Lamm on keyboards and vocals, Lee Loughnane on trumpet and vocals and James Pankow on trombone. The band line-up also includes Wally Reyes, Jr. on drums, Keith Howland on guitar and vocals, Lou Pardini on keyboards and vocals, Ray Herrmann on sax and flute, Neil Donell on vocals, Brett Simons on bass and Ramon "Ray" Yslas on percussion.

For five years, Chicago raised over a quarter of a million dollars to fight breast cancer for the American Cancer Society by having a winning bidder come on stage and sing “If You Leave Me Now” in concert.  Chicago generously support other charitable causes, donating a portion of ticket sales to Kelly Cares, established by Notre Dame head coach Brian Kelly and his wife Paqui, to support local, national and global organizations that strive to improve their communities in the areas of health and education.  Portions of ticket sales also benefit the Ara Parseghian Medical Research Foundation, which seeks a cure for a fatal children’s disease, Niemann-Pick Type C. Chicago manager Peter Schivarelli, who played football for Coach Parseghian, is on Notre Dame’s Board Of Directors for their Athletic Commission.  Chicago has also associated with Hannah & Friends, an organization that serves children and adults with special needs. Hannah & Friends is the personal mission of Maura Weis and her husband, Charlie Weis, the former coach at the University of Kansas.

From the signature sound of the Chicago horns, their iconic Vocalists, and a few dozen of ever-Classic Songs, this band’s concerts are celebrations.  2020 marks the band’s 53rd consecutive year of touring, without missing a single concert date!

Chicago continue to be true ambassadors for their beloved hometown, carrying the city's name with pride and dignity around the world.