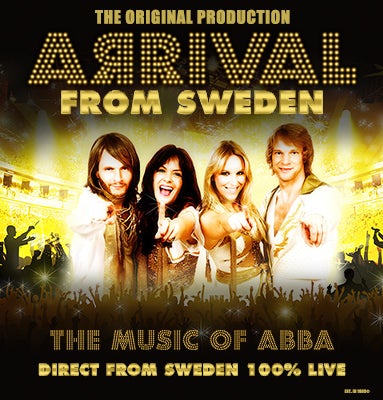 The Steven Tanger Center for the Performing Arts announced today that ARRIVAL FROM SWEDEN will present “The Music of Abba” on Friday, August 18. Tickets will go on sale to the public this Friday, December 23 at 10 a.m. at TangerCenter.com.

Founded in Sweden in 1995, ARRIVAL FROM SWEDEN has become one of the world’s most popular ABBA show bands, and has sold out arenas while touring the world in over 70 different countries. The only group to have been given a previously unreleased song from Bjorn Ulvaeus and Benny Andersson of ABBA, the song “Just a Notion” was recently re-recorded on their latest album “Voyage.”

Featuring authentic costumes and your favorite songs, it is celebrated as the best ABBA show in the world. ARRIVAL is the closest you will get to seeing ABBA!