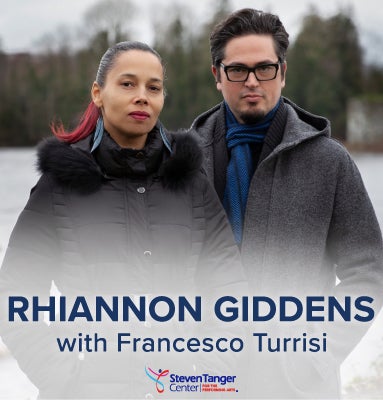 Acclaimed musician Rhiannon Giddens uses her art to excavate the past and reveal bold truths about our present. A MacArthur “Genius Grant” recipient, Giddens co-founded the Grammy Award-winning Carolina Chocolate Drops, and she has been nominated for six additional Grammys for her work as a soloist and collaborator. Giddens’s lifelong mission is to lift up people whose contributions to American musical history have previously been erased, and to work toward a more accurate understanding of the country’s musical origins. Among her many diverse career highlights, Giddens has performed for the Obamas at the White House, served as a Carnegie Hall Perspectives curator, and received an inaugural Legacy of Americana Award from Nashville’s National Museum of African American History in partnership with the Americana Music Association. Her critical acclaim includes in-depth profiles by CBS Sunday Morning, the New York Times, the New Yorker, and NPR’s Fresh Air, among many others.