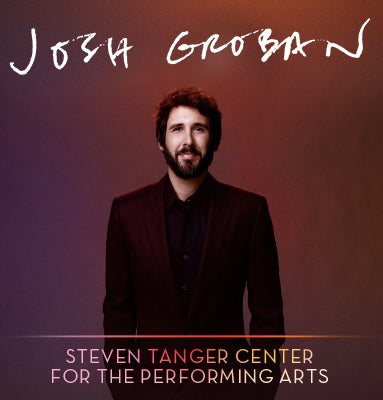 Possessing one of the most outstanding and instantly recognizable voices in music, GRAMMY Award-nominated singer, songwriter, and actor Josh Groban has entertained fans across the globe with his multi-platinum albums and DVDs (over 30 million sold worldwide), electrifying live performances, and comedic film and television appearances. Known for his exceptional voice and hits such as "You Raise Me Up," "The Prayer," "To Where You Are," and "You Are Loved (Don't Give Up)," the Los Angeles native stands out as “the only artist who has had two albums appear on the Top 20 Best-Selling Albums list of the past decade,” according to Billboard.

In 2017, he concluded his Broadway run in Natasha, Pierre & The Great Comet of 1812, which Time Out New York called, “one of the best musicals of the decade”. He also released his first coffee table book, Stage to Stage: My Journey to Broadway, chronicling the past two years of his life on Broadway. 2018 marked yet another watershed year for Groban as he extends his influence across music, film, television, and Broadway yet again. He co-hosted the Tony Awards to widespread enthusiasm worldwide after garnering his first nomination in 2017.

Groban remains an active arts education philanthropist and advocate as a member of Americans for the Arts Artists Committee and Groban’s Find Your Light Foundation helps enrich the lives of young people through arts, education, and cultural awareness.

VIP Parking is located directly adjacent to the venue.

Please note: The Guilford County Board of Health has issued a mandate requiring masks be worn indoors effective Friday, Aug. 13, 2021 at 5 p.m.

In attending this event, you certify and attest that you and all individuals in your party attending the event will follow the below regulations: