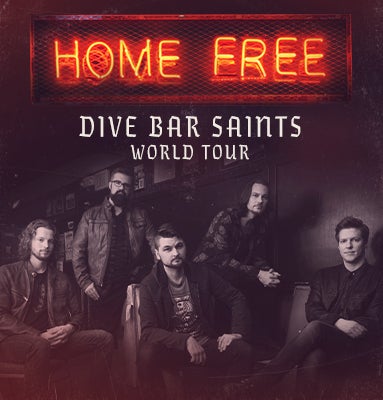 The Steven Tanger Center for the Performing Arts will host Home Free in concert on February 17, 2022.

With praise rolling in from the likes of Rolling Stone, TODAY Show, Fox & Friends, Country Living, Perez Hilton, and AXS.com, these extraordinary showmen electrify crowds with a one-of-a-kind live show, mixing Nashville standards, soaring originals, and quick witted-humor that brings audiences to their feet with energy and laughter.

Their fifth studio album, DIVE BAR SAINTS, was released on September 6 under Home Free Records. Home Free's extensive catalog spotlights five Top 5 albums, including TIMELESS, FULL OF (EVEN MORE) CHEER, FULL OF CHEER, COUNTRY EVOLUTION, and their breakout debut CRAZY LIFE (2014), which hit #1 on the iTunes Country chart and #4 overall following their victory on NBC’s The Sing-Off. To date, they’ve sold more than 400,000 albums worldwide, and had 100-million career audio streams and 306-million views on YouTube.