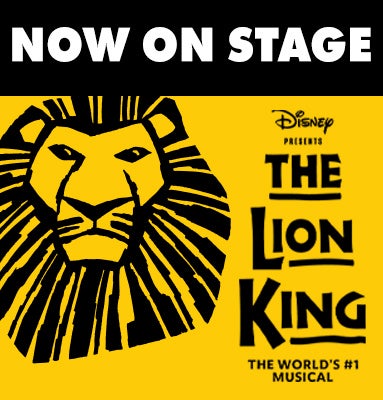 More than 100 million people around the world have experienced the awe-inspiring visual artistry, the unforgettable music, and the uniquely theatrical storytelling of this Broadway spectacular – one of the most breathtaking and beloved productions ever to grace the stage.

If you're feeling sick

If you are feeling sick or have tested positive for COVID-19, please stay home. Email us at customercare@tangercenter.com to see if seats are available to an alternative performance of the show’s engagement. If no seating is available, refunds may be obtained if you have purchased through our authorized ticketing providers - TangerCenter.com, Ticketmaster.com or the Tanger Center Ticket Office.

Disney on Broadway performances are recommended for a general audience. As an advisory to adults who might bring young people, Disney recommends its productions for ages 6 and up. Children under the age of 2 will not be admitted to THE LION KING tour performances. All persons entering the theater, regardless of age, must have a ticket. Please be advised that smoke, haze and flashing lights are used during the performance.