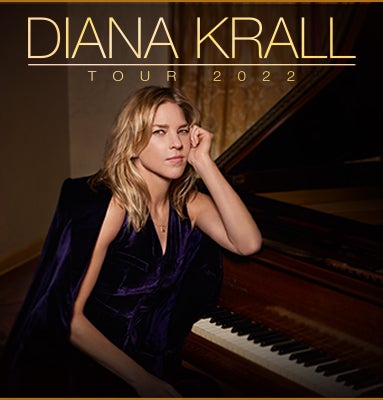 Diana Krall is the only jazz singer to have eight albums debut at the top of the Billboard Jazz Albums chart. To date, her albums have garnered two Grammy® Awards, ten Juno® Awards and have also earned nine gold, three platinum and seven multi-platinum albums. Krall's unique artistry transcends any single musical style and has made her one of the most recognizable artists of our time.  As The New York Times recently noted Krall possesses, “A voice at once cool and sultry, wielded with a rhythmic sophistication”.

Diana Krall’s recordings have been included in several film soundtracks and she has expanded upon her role as a performer to include songwriting, producing and arranging and has brought her talents to collaborate with many other artists including Paul McCartney, Barbra Streisand and Tony Bennett.  She tours extensively around the globe to sold out audiences, appearing at premiere jazz festivals and concert halls throughout North America, Europe, Asia and Australia.

Have dinner before the show at Tanger Center!

For more information, visit our Prelude Experience page, or you can book here.

In attending this event, you certify and attest that you and all individuals in your party attending the event will follow the below regulations: