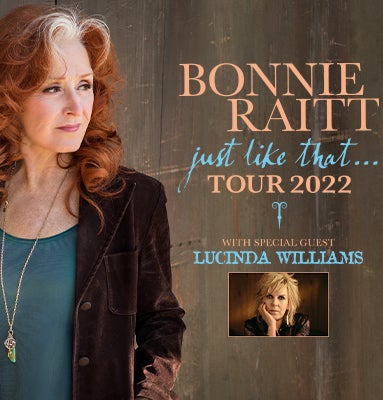 Bonnie Raitt is a singer, songwriter and guitarist whose unique style blends blues, R&B, rock, and pop. After 20 years as a cult favorite, she broke through to the top in the early 90s with her GRAMMY-award winning albums, 'Nick of Time' and 'Luck of the Draw,' which featured hits, "Something To Talk About" and "I Can't Make You Love Me" among others. The ten-time Grammy winner was inducted into the Rock & Roll Hall of Fame in 2000 and Rolling Stone named the slide guitar ace one of the “100 Greatest Guitarists of All Time” and one of the "100 Greatest Singers of All Time.”

As known for her lifelong commitment to social activism as she is for her music, Raitt has long been involved with the environmental movement, performing concerts around oil, nuclear power, mining, water and forest protection since the mid 70's.  She was a founding member of MUSE (Musicians United for Safe Energy) which produced the historic concerts, album and movie NO NUKES and continues to work on safe energy issues in addition to environmental protection, social justice and human rights, as well as creator’s rights and music education.

Bonnie Raitt will be joined by special guest Lucinda Williams. Williams has traveled a long road since her 1979 debut, Ramblin’ on My Mind, followed by Happy Woman Blues, her first album of originals released forty years ago in 1980. (She says that she’s still “the same girl” except that now “I have a bigger fan base and I can afford to stay at better hotels.”) Over the course of fourteen remarkable albums, three Grammy awards, and countless accolades, including Time’s Songwriter of the Year of 2001, Williams is one of our most revered artists, beloved for her singular vocals and extraordinary songs. Her recent double albums, Down Where the Spirit Meets the Bone (2014) and Ghosts of Highway 20 (2016), released on her own label, received some of the best reviews of her career.

Ticket holders are requested to wear a face mask.  We suggest that ticket holders be up to date on vaccination protection. We encourage ticket holders to receive a negative COVID-19 test within 72 hours of the concert. Please be sure to check the venue website for any updates on the mandated COVID-19 protocols before the concert.