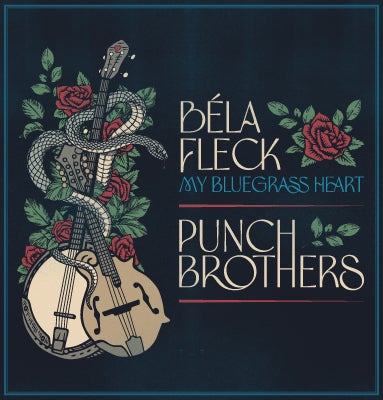 About Béla Fleck
Over the last four decades, Béla Fleck has made a point of boldly going where no banjo player has gone before, a musical journey that has earned him 15 Grammys in nine different fields, including Country, Pop, Jazz, Instrumental, Classical and World Music. But his roots are in bluegrass, and that’swhere he returns with his first bluegrass tour in 24 years, My Bluegrass Heart.The Grammy award-winning album,My Bluegrass Heartis the third chapter of a trilogy which began with the 1988 album, Drive, and continued in 1991 with The Bluegrass Sessions. “I was kind of surprised, frankly, when I sent out the invite for the first touring ensemble, because everyone I asked said yes!” he said.Fleck’s first road band will spotlight some of the best of the new generation of bluegrass players, all sportinga myriad of Grammy Awards and nominations, as well as gigantic piles of IBMA awards for their instruments: fiddler Michael Cleveland, mandolin virtuoso Sierra Hull, celebrated multi-instrumentalist Justin Moses, bassist/multi-instrumentalist Mark Schatz, and the amazing Bryan Sutton on guitar.

About Punch Brothers
Punch Brothers are mandolinist Chris Thile, guitarist Chris Eldridge, bassist Paul Kowert, banjoist Noam Pikelny, and violinist Gabe Witcher. Their accolades include a Grammy® for Best Folk Album for their 2018 release, All Ashore, and praise from the media, including The Washington Post, which said, "With enthusiasm and experimentation, Punch Brothers take bluegrass to its next evolutionary stage, drawing equal inspiration from the brain and the heart." This band of virtuosi had spent more than a decade changing the face of acoustic music, stretching the limitations of instruments, and influencing a generation of young musicians -- but life has a way of keeping a band from getting in the same room. Thile elaborates that "these sessions were a reminder for me of what's really important. I felt silly having this band take up so little of my creative year; it reminded me that us five together is critical to my happiness."