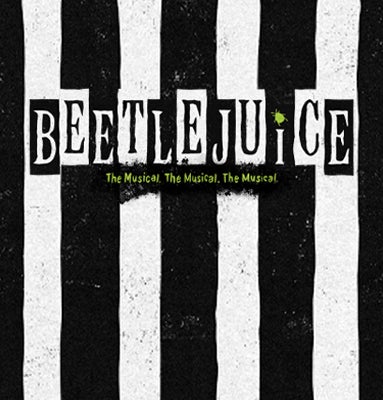 He earned his stripes on Broadway… now the ghost-with-the-most is coming to the Triad.

It’s showtime! Based on Tim Burton’s dearly beloved film, this hilarious musical tells the story of Lydia Deetz, a strange and unusual teenager whose whole life changes when she meets a recently deceased couple and a demon with a thing for stripes. With an irreverent book, an astonishing set, and a score that’s out of this Netherworld, BEETLEJUICE is “SCREAMINGLY GOOD FUN!” (Variety). And under its uproarious surface (six feet under, to be exact), it’s a remarkably touching show about family, love, and making the most of every Day-O!

Have dinner before the show at Tanger Center!

For more information, visit our Prelude Experience page. Please note that Prelude Reception is not currently available for matinee performances.

Some shows do not appeal to every guest or every age. Broadway shows will offer a varied range of entertainment that could include sudden loud sounds, strobes/flashing lights, adult language, adult situations, or fog and haze. Patrons are responsible for making an informed purchasing decision on show content. Each Broadway show has its own web site that describes content and age recommendations.